Pam and Bill’s whirlwind love story is one of romantic gestures and devoted affection. They met online and were engaged just 366 days after their first date; and, they married exactly 90 days after their engagement! They have an affinity for the number eight – their birthdays are eight days apart which is the same length of time that Pam’s parents Ron and Adrienne are apart. Ron and Adrienne have been married 50 years! Bill and Pam also met in the year twenty EIGHT teen. It was only fitting that Bill use the number eight in his engagement plan. Bill proposed on June 8th on the 18th hole of Pine Hills Golf Course. Bill had been giving Pam a romantic card for each day of the month beginning June 1st. After Pam sunk her putt at the 18th hole, Bill gave the 8th card in which he asked her to marry him.

When the Wychmere Beach Club still had September 8th available for a wedding date, Pam and Bill knew it was meant to be. Even though that meant planning a wedding in under three months, they were both committed to making it happen. They both love the ocean and the venue provided a beautiful backdrop with the ceremony spot on a rooftop deck overlooking Wychmere harbor. Cape Cod in September is just dreamy – many tourists and seasonal visitors leave to go back to school – but the weather is still ideal for outdoor activities. Part of the hustle and bustle to book in September was to take advantageous of the simply gorgeous Cape Cod weather. As luck would have it, September 8th turned out to be a beautifully sunny day with temperatures in the low 70’s (F).

Given the short turn around and limited options, Pam had to move quickly not only on the venue, but also on design/ theme choices and vendor commitment. She went with a classic navy color scheme to keep the motif simple with elegant blush and metallic accents. Her florist pulled together beautiful arrangements and bouquets including lush white and blush flowers. Hand-opened garden roses and ranunculus blended with delicate greenery and soft fillers in understated gold compote bowls.

When it came to attire, Pam knew she wouldn’t have time to custom order and was worried she wouldn't find something that would suit her style and budget. She purchased her dress from Cristina’s in Andover, MA one week after getting engaged. The staff were so kind and friendly and helped her select a brand new Blush By Hayley Paige sample dress from Spring 2019 and purchase it right off the rack. A fingertip Toni Federici veil and Thomas Knoell earrings were all selected on the very same day! For her ‘something old’, Pam wore her mom’s 50 year old watch, which Pam’s dad had given her on their wedding day. Her ‘something borrowed’ was a simple bracelet from her sister. Staying in the color scheme, the groom picked a very dapper navy custom suit from Suit Supply and blush tie. He even coordinated his socks and shoelaces!

Bill and Pam also wanted to keep their bridal party simple and small. Bill chose his Dad as the best man and Pam chose her sister Kim as matron of honor. Bill’s niece Layla was the flower girl and Bill’s nephew James was the ring bearer. When Pam returned to Christina’s for a fitting, she found a perfect “mini-me” version of her bridal gown which was also available off the rack. The stars aligned again when Layla tried the Hayley Paige dress on and needed no alteration!

After an intimate ceremony with 75 family and friends, Pam and Bill invited their guests to enjoy cocktail hour outside followed by a formal sit down dinner and dancing. The day was everything they had hoped for and more. Even with more time to plan, they wouldn’t have changed a single thing. They spent the days following the big event relaxing in Nantucket and look forward to celebrating their anniversary during the most magical time in New England every year. 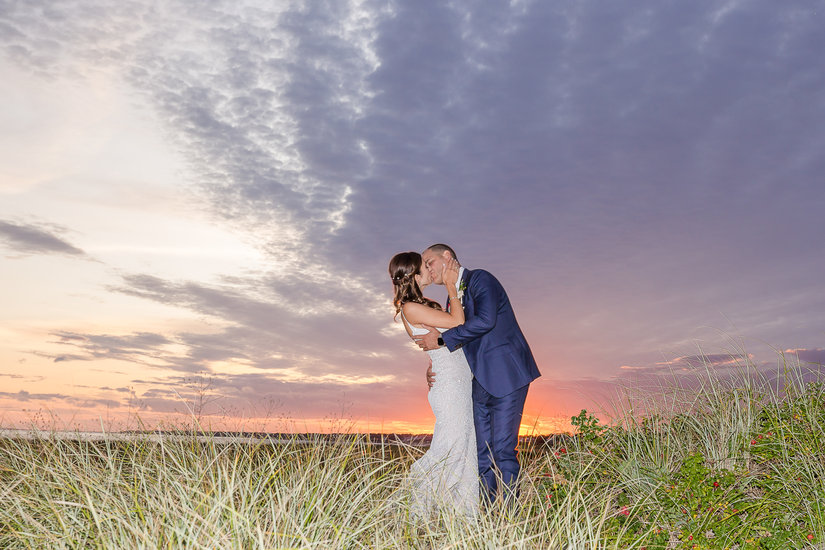 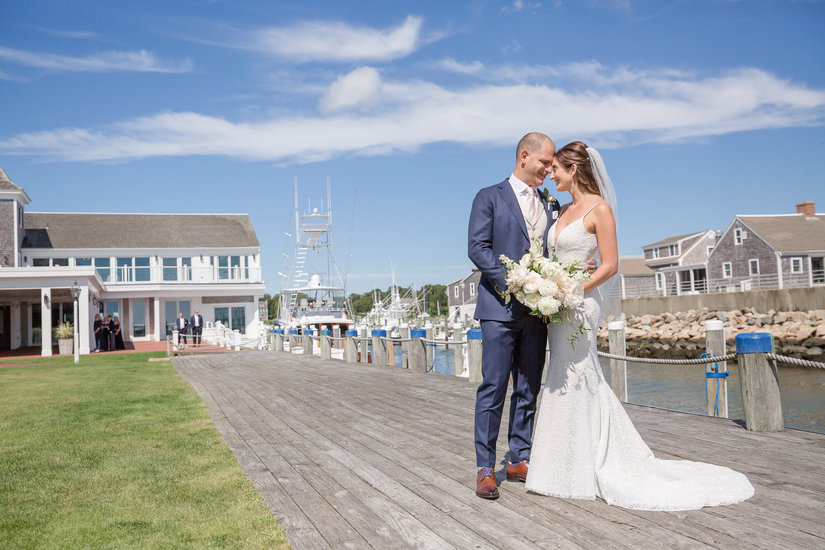 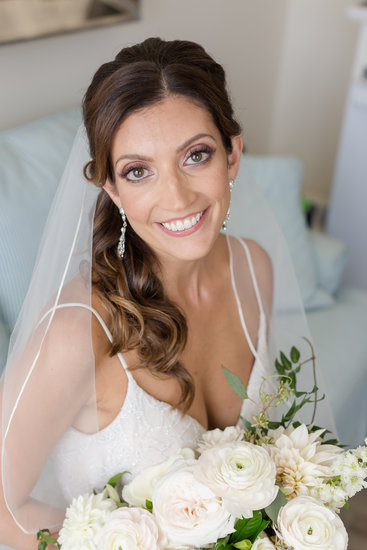 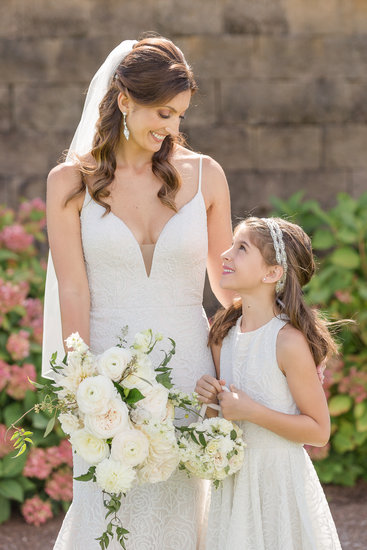 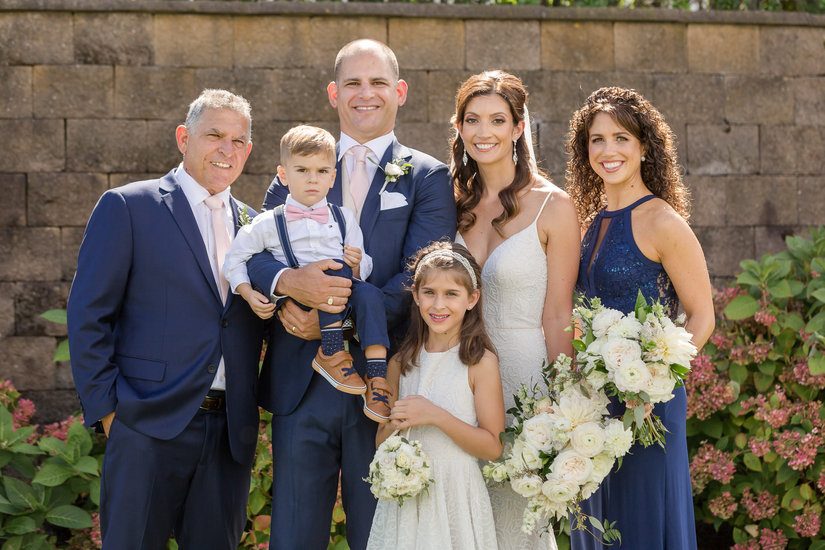 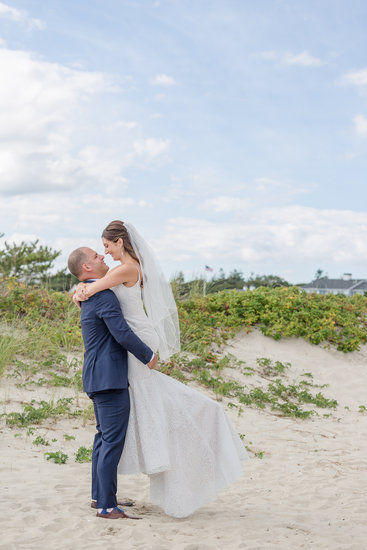 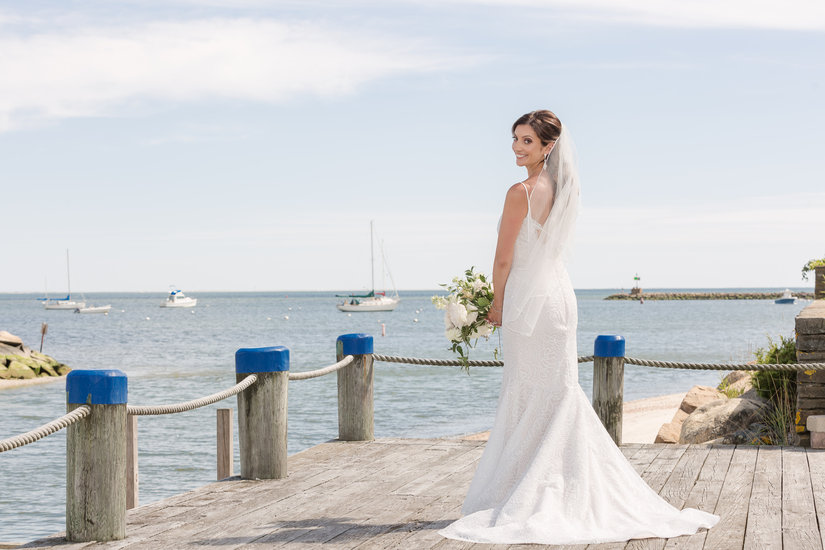 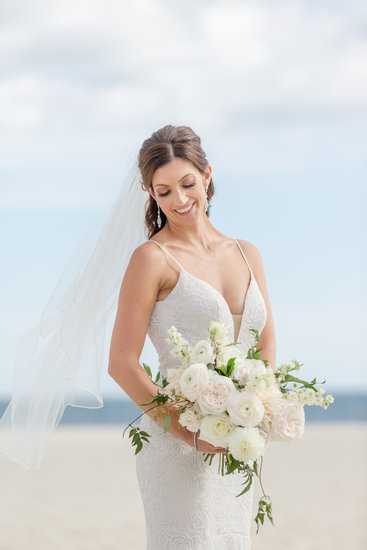 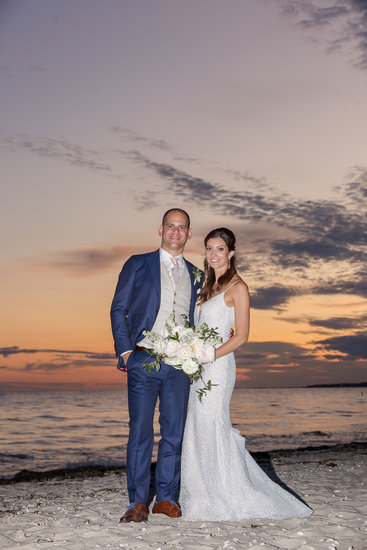