John and Jaclyn first locked eyes at a Greek Orthodox Charity Gala at the Plaza Hotel in NYC on September 17th, 2016. After a bit of playful banter, John asked for her number, and a week later, they had their first date. Fast forward a year and a half later – Jaclyn was about to have brunch at the Plaza Hotel with a friend after helping her with a photoshoot around NYC, when suddenly, John emerged. He looked as dashing as ever, had flowers in one hand, and got down on one knee. The photographer, who was with her friend and I previously was in on it, and captured all of the magic. After celebratory drinks at the Palm Court in the Plaza, they walked to her parent’s apartment to surprise them with the great news, but of course, they were in on it too! They hosted a mini celebratory party during the day for them, and John’s parents and siblings were there as well! The icing on it all was that my brother and his wife flew in from Seattle to be with us too! It was such an incredible day, filled with love, food, and sharing stories. At around 7pm, John and Jaclyn hopped in an Uber to head to dinner – just the two of them – and to her surprise, we pulled up to the Plaza. Rather than head to the dining room, they walked towards the concierge, who said “we’ve been waiting for you” as they handed them a room key. She was stunned. Their hotel room was adorned with rose petals and stocked with chocolate covered strawberries and champagne. It was perfect. John packed outfit options for her to select from, and all of her makeup and hair tools to get ready with. He thought of everything. We they hopped into another Uber and headed to dinner at the Nomad hotel, where we dined on their famous chicken and continued the celebration with more champagne.

When deciding on a venue for their big day, they played with the idea of NYC, and even the Plaza Hotel, but ultimately decided on the country where they both have deep roots. Since both of their fathers are from Greece so the country and culture was a huge part of their lives growing up. Jaclyn’s father is from the island Lefkada, and John’s father is from the island of Skyros. Since they are both Greek-American, they wanted to incorporate traditions from both sides, so it would feel as though the wedding was uniquely them. Every detail catered to both sides. The programs and menus were double-sided (one side in Greek, the other in English). The music was a blend, with a traditional Greek band and a DJ. Even the speeches were in both English and Greek. They wanted everyone to feel welcome – whether they came from down the street in the village, or from NYC. They had 7 countries represented there! Their ceremony was a traditional Greek Orthodox wedding, in one of the most beautiful orthodox churches they’ve ever laid their eyes on. It was completely covered in religious paintings and icons. To put an American spin on the ceremony, they had bridesmaids and groomsmen walk down the aisle, and Jaclyn’s father walked her all the way to the alter. As for the style of the wedding, they wanted it to feel like an elevated taverna. Their favorite memories of Greece have included breaking bread with family and friends at tavernas, and they wanted to recreate that on a larger scale – with all 300 guests. They had the food come out in abundance, and family style, so it would feel as though you were having an intimate dinner, but then have the dancing kick off and bring the fun! The color palette was intended to compliment the natural beauty of the island. The bridesmaids where in a dusty rose color, as were the roses at the venue, while the groomsmen were in a dark blue.

All décor was a dusty rose, white or natural greenery, which will forever remind the bride of the Greek islands. By embracing the beauty of the island, and enhancing it with some elegant touches and gold accents, they were able to create the wedding of their dreams. When the guests entered, they had a hand-painted guest book surrounded by photographs of our parents and grandparents on their wedding days. Each place setting had double-sided menus (in English and Greek), koufeta adorned with a gold olive leaf, a sparkler (to light during our first dance) and custom matchbooks. To create a romantic ambiance, they had candles of alternating heights at each table on top of the white gauze runner with the garland on top. The juxtaposition of the candles, with the greenery, and the authentic taverna tables created a brilliant affect. Near the bar they created a lounge with custom dusty rose and white pillows, creating a comfortable space to hangout when the guests needed a break from dancing.

Roses are not indigenous to the island of Skyros, but they are traditionally the most romantic and classic floral, so they had them flown in from Holland. They florist paired them with olive leaves to bring in a Greek element. The archway at the church was adorned with an olive leaf and rose garland, as well as the boat they entered the reception with. Jaclyn’s bouquet was blush and white peonies, while they bridesmaids and groomsmen had rose bouquets and boutonnieres. To add more softness to the space, we had white gauze hanging from the poles of the arbor, fastened with olive leaves and roses, and white gauze as the table runner under the olive and rose garlands on each table.

There were many little personalized elements at many touch points throughout the night. While getting ready, their best man and her brother came to stuff money in her shoes while she was getting ready where traditionally the bride is supposed to exclaim “my shoes are still too loose, they need more stuffing.” They opted out of doing a first look, to make the walk down the aisle that much more intense. However, Jaclyn did do a first look with her dad which created waterworks for both.

John and Jaclyn came in on a little traditional Greek fishing boat, which was very unexpected and very fun! On the island of Skyros, it’s tradition for the groom to “run” and the men are supposed to grab him and hang him from a tree until he promises to throw them a party they will never forget. Their signature cocktail was a mojito, as a nod to the fact that we first said “I love you” in Havana, Cuba. Also very serendipitously, the designer of her wedding gown, Lazaro, is from Cuba. As for desserts, they had a Viennese table, which included both Greek and American desserts, but the couple’s favorite sweet was the gelato bar! They were able to pick out the flavors and they were the hit of the night! One of their favorite little details was in the bathroom: on the mirror, in lipstick, the bride wrote “You look great, now get out and dance” in both English and Greek.

Jaclyn wanted a timeless look, and to feel like herself, so she took my normal everyday routine and enhanced it. She did her own hair and make up on her own, and is so happy she did. It was so enjoyable to hang out with her bridesmaids while she got ready, as it felt much more relaxed. It also felt more traditional, like she had gone back in time. She wore her hair down, with two clips to hold it back so it wouldn’t fall into her face. Her lip color was a tinted balm by YSL, that smells like watermelon, a scent that reminds her of Greece. The something blue was an embroidered patch she had sewn into her dress that said “John’s Bride.” Her gown was lightweight, but had a long train. She toyed with different style options, but ultimately decided to have a full bottom because it’s not often that a woman gets to wear a ballgown, so she wanted to capitalize on the opportunity. As for jewelry, she wore her mother’s diamond stud earrings (something borrowed), a diamond bracelet that her mother had given her as a wedding gift, and an olive leaf pendant necklace that John gave her the day of as a wedding gift. The pendant was extremely thoughtful because it was the same casting of an olive leaf that she gave all the bridesmaids as a part of their gift. Her shoes were glittery Jimmy Choos, which were comfortable for over 7 hours! Inside her shoe she had a six pence taped to them (which is the final line of the something blue rhyme), which was a gift from her brother, and minted in the year that their grandparents were married. The groom wore a custom tuxedo, which they designed together in NYC. It had their signature “JT loves JT” embroidered on the inside of the coat pocket. He wore navy rope cufflinks as a nod to the fishing culture of Skyros, and velvet loafers to add a little flair. On one wrist he wore a bracelet that Jaclyn’s parents had given him when we first started dating, and the other wrist was the watch she gave him as a wedding present.
The wedding ended at 6:45 in the morning in the only way to end an island wedding – by jumping into the Aegean sea. All the guests who were still there at that hour accompanied the bride and groom with the plunge, ending the evening on the highest of notes. 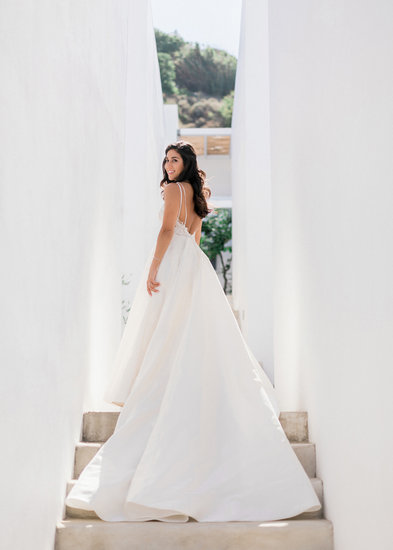 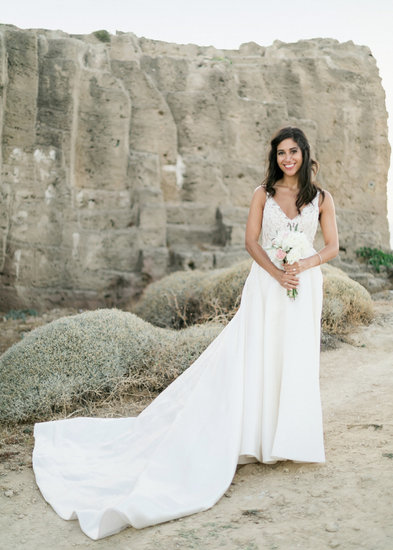 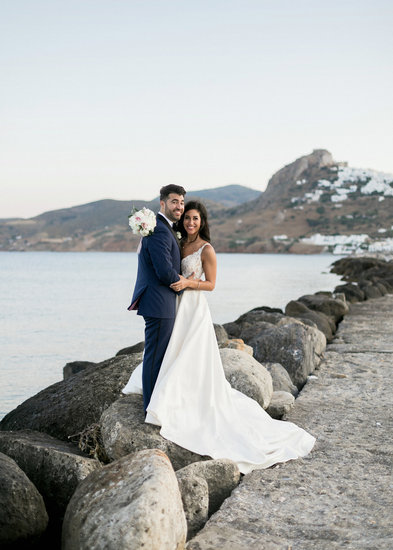 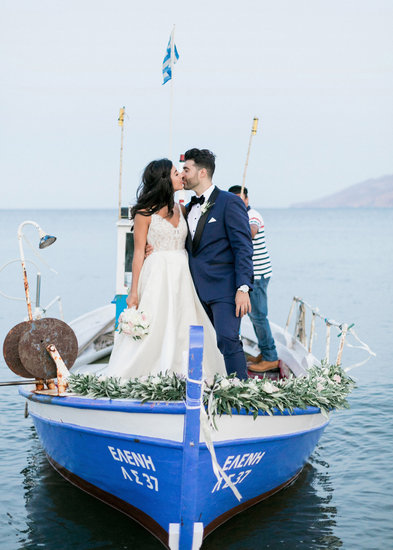 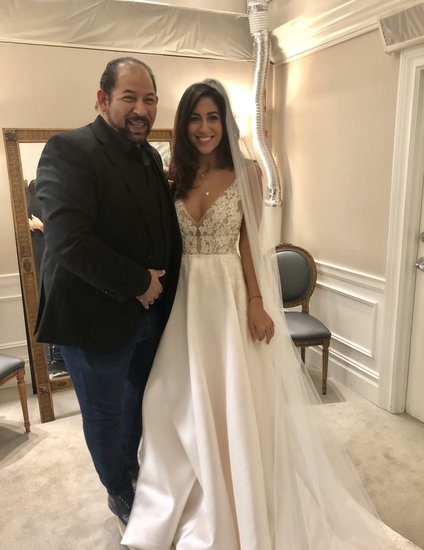