On a Fall evening in 2009, Janet and Nicholas became friends after meeting at a trivia night at WildWings Restaurant in Savannah, Georgia, where they were both living. Janet, originally from New Jersey, and Nicholas, from Rhode Island, found each other and immediately became best friends. After two years of friendship, an opportunity to go on a snowboarding trip to Lake Tahoe with friends arose and both Janet and Nicholas left for the trip as friends and returned home to Savannah as a couple.

Summer of 2013, they packed up their bags, their two dogs and moved to Chico, California for a new adventure. The couple wanted to be closer to Lake Tahoe, where they are both avid snowboarders and enjoy the outdoors and being in nature together. After many years of dating, Nicholas FINALLY asked Janet to be his wife during a mountain biking trip in Lake Tahoe on October 7, 2017.

Janet and Nicholas immediately started their wedding planning. The couple went back and forth on where the wedding should take place. Their love for Tahoe had them searching locations around the lake but their hearts kept bringing them back to Rhode Island. Every summer for seven years, the couple would spend a week or two in Narragansett, Rhode Island. After a trip to Rhode Island in May 2018, the couple decided that Rhode Island was the perfect backdrop for their fairy tale wedding.

Planning a wedding from the West Coast has its challenges, but ultimately details started to come together. The couple decided on July 6, 2019 as their wedding date, which happens to be Nicholas's sister's wedding anniversary as well, making the date extra special for the couple. The ceremony would take place at the South Ferry Church in Narragansett and the reception at the North Beach Club House on Narragansett Town Beach.

The couple picked out the locations in May of 2018, and did not return to Narragansett until the week of their wedding. All planning was done from California and Janet and Nicholas's wedding vision was accomplished via the internet, phone calls, emails, and help from family and friends. So when the couple finally arrived to Rhode Island on July 3rd for their wedding, all the planning from afar was done and now the couple was ready to see their vision come together.

From the bride...
The morning of the wedding I was a nervous wreck. Most brides have a hair trial days before their wedding, I didn't have one. I was meeting my hair and makeup artist, Lynda Williams, that morning for the first time. Most brides meet their photographer in advance to make a plan for detailed shots; I only had a phone conversation with Emily Crenca three days prior. Most brides visit the floral shop months in advance to go over flowers and the vision for the wedding, I did not. I had a phone conversation and exchange of emails with Blooming Blossoms months in advance.

Needless to say, I was nervous that my vision was not going to come together and that I would be an emotional wreck. Lynda Williams arrived and got started on everyone's hair and I began to feel better after seeing her work. Moments later, Blooming Blossoms arrived with the bouquets. The moment I saw the bridal bouquets I started crying. The flowers were everything I imaged and more. After seeing the flowers, I knew that whatever happened next was going to be beautiful, just like the flower arrangements I was looking at.

The ceremony was everything I had ever dreamed of. South Ferry Church is a church out of a fairy tale book. The charm with stained glass windows, white paint, and old pews made the backdrop for our wedding spectacular. Having Nicholas's dad, Michael, marry us was even more special. He knew our love story and spoke from his heart. Our mothers, Dina and Fran, were also involved in the ceremony and each did a wedding reading. It was beyond special.

After the ceremony, the wedding party departed to a private beach in Narragansett where bridal party photos were taken. Emily Crenca is an artist and captured the party with such detail. Nicholas and I were able to have time where we took private photos with Emily and the photos showcased our love for each other but also how we can be silly with each other. It was romantic and the most perfect backdrop.

The reception exceeded my expectations. We hired Russell Morin Events and Catering and our day of wedding coordinator, Daniel Larson, went above and beyond for our big day. My father, Terry, made six oyster garlands to be used at the reception and I did not have the vision for where to display them. I asked Daniel if he could be creative and do something with the garlands and they looked amazing. As with most of our decorations, Daniel's vision aligned with mine and he made the room magical. From the appetizers to the wedding cake, Morin's hit it out of the ballpark. Their attention to detail was suburb.

One detail Nicholas and I incorporated in place of table numbers was post cards of places/cities that we loved to visit or once lived in. The head table was Savannah, GA to represent where we first met. Other tables included Narragansett, RI; Chico, CA; Tahoe, CA; and Maui, HI where we planned to honeymoon.

All the nerves and hundreds of email correspondence were worth the outcome. Nicholas and I at one moment in the night stepped outside to take a breath and to look in at all the love that surrounded us that day. I even said to him as I started to cry, "There is so much love in one room, I can't control my emotions". The love was so overwhelming and I will never forget all the moments spent with loved ones.

From the groom...
I knew that planning a wedding from across the country was going to be tough. What I did not realize was just how easy it can be with the right professionals working to make your special day as you envision it. Don't get me wrong, there were countless emails, Internet searches, and phone calls. However, once you find the right people, it just works.

For me, what was most important was that our family and friends were present to witness our union and take part in the reception. It was one of those rare opportunities to see both sides of my parents' families in the same room and be able to spend time with them. I have not seen many of my Aunts and Uncles in years, and I want to change that. It was also great having my wife's family and mine be able to meet up and spend time together.

The ceremony was so special. The music (Matthew Kearns) and flowers were amazing, and my wife looked stunning. It was tough for me to keep it together when she walked down the aisle. It was a moment I will never forget. The church is special to me because quite a few of my friends have been married there. Having my dad marry us was extra special, and something that I will cherish forever.

The reception was classy. Daniel from Morin's and his team made the North Beach Clubhouse look spectacular, and there was next to no one on the beach. I could not have asked for anything better. The flowers from Blooming Blossoms exceeded expectations, and the food and drink service was five-star. Sean from Music Mixers was a total professional, and Emily Crenca's pictures came out amazing. One highlight from the day was when Emily came over to my parent's house for the groomsmen pictures. We had so much fun as you can tell from checking out the pics.

We hired a limo to drive us from the ceremony to pictures to the reception and then a late night bus (both from Arrow Prestige) to take us to an after party at a chill bar called Turtle Soup and then back to the hotel. The transportation team was courteous and on time. The limo and bus were top notch. The after party was important because it gave Janet and I extra time to spend with friends and family. Trust me, the day goes by so fast. Was all that planning worth it for one day? Absolutely. I married my best friend. 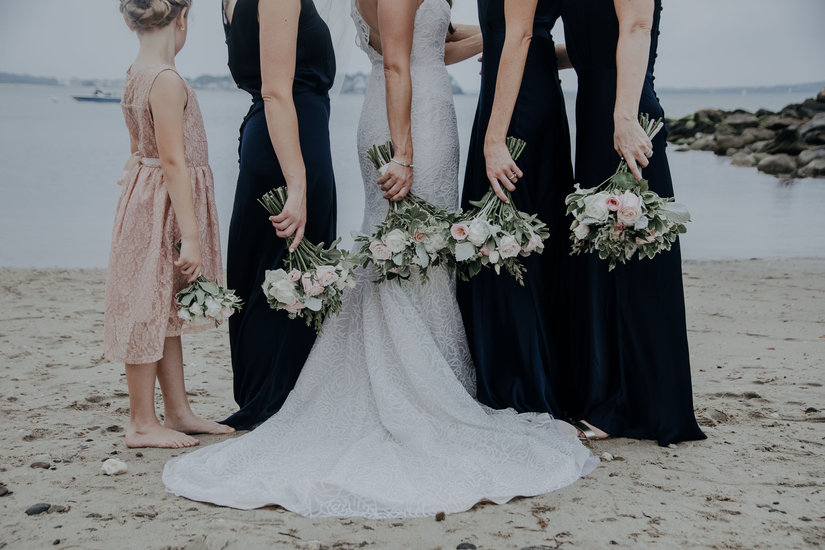 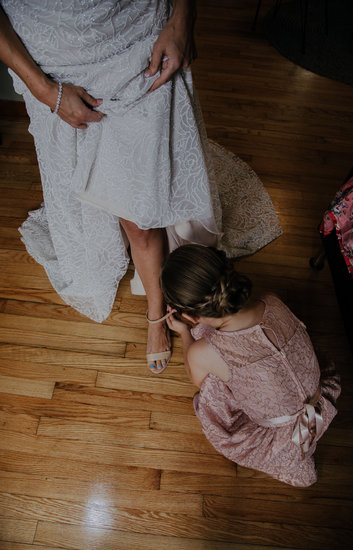 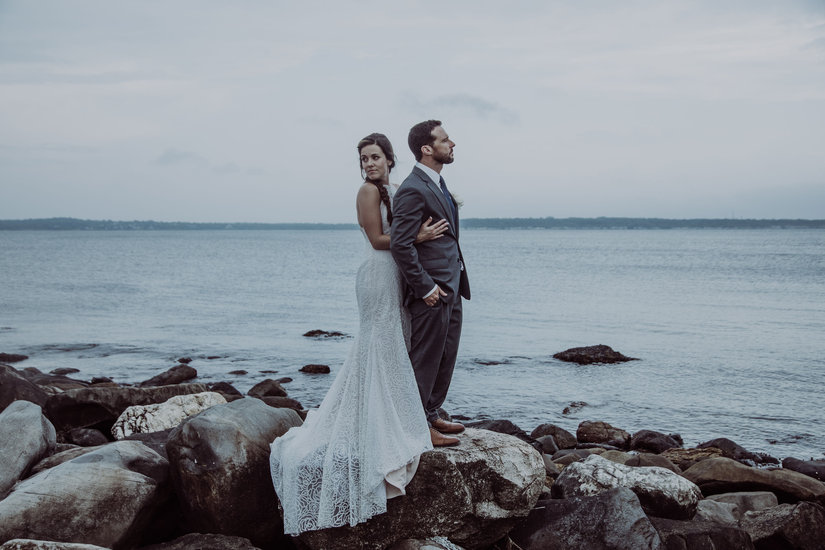 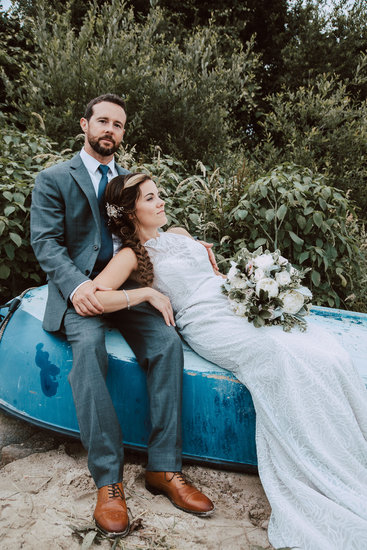 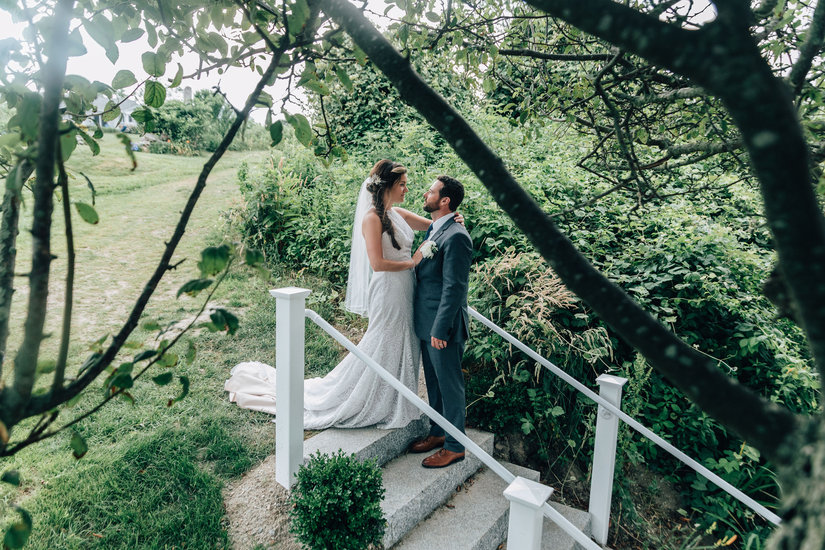