Eric and I were married on October 7th, 2017 at the Speed Art Museum in Louisville, KY after a 15 month engagement. I had an absolute blast planning my “dream wedding”. The venue was by far the easiest choice. Both Eric and I are both very artistic, he is a graphic designer and I minored in art and art history in college, so the Speed was the perfect place for us to exchange vows. Not to mention, it just went through a four-and-a-half year, multi-million dollar renovation, so it felt brand new and was absolutely beautiful.

Our ceremony was held in the multi-storied, all-glass atrium. I love flowers and wanted the wedding to be filled with them. Our ceremony space started with two giant urns overflowing with hydrangeas, orchids, roses, & David Austen roses. Past this were rows of gold chivari chairs, with a cream carpeted runner lined on either side with rose petals. The end of the aisle was an elevated platform with three huge flower walls connected by draperies. Eric wore tuxedo pants with a white dinner jacket complemented with black lapels. His groomsmen donned matching all black tuxedos, with my five bridesmaids in white and my sister/Maid of Honor in a navy blue Hayley Paige Occasions jumpsuit. It was cloudy most of the day and it began to rain right after I reached the ceremony space. It was pretty cool to watch the rain come down as I walked down the staircase.

I walked down the ‘floating staircase’ to Israel Kamakawiwo’ole’s “Somewhere Over the Rainbow”. Not only is this one of my favorite songs that my grandmother would sing to me, but this version gave a nod to Hawaii, where we would be spending two weeks on our honeymoon. My dress was the dusty blue ‘Lumi’ gown by Hayley Paige. I first spotted it on the runway when Hayley debuted her 'new' collection. My heart stopped, that was THE dress. I tracked down a trunk show in Orlando, FL two months later in December. My family and I flew to Florida where I tried on 16 Hayley Paige and Lazaro gowns. The traditional 'Lumi' gown, saved for last, was the one! It is one of the most gorgeous gowns I’ve ever seen, it is layers of blue and tan tulle, topped off with hundreds of beaded stars and flowers. I had my super talented cake artist, Alex Narramore of The Mischief Maker, re-create the color and pattern for my bridal cake. My bridal bouquets consisted primarily of light pink peonies and anemones.

The cocktail hour continued around the corner where standing tables were scattered. Guests could choose from a variety of beverages – including our signature drinks. His was a Kentucky Mule while mine was a Pink Pomegranate Margarita. If that didn’t suit your fancy, you could go to our Champagne Bar where three different champagnes – brut, rose brut, & prosecco – awaited you along with liqueurs and fruit garnishments. Passed appetizers included mini burgers, ahi tuna wontons, & loaded fingerling potatoes. Guests were also welcome to walk the first-floor art gallery during this time.

Our reception was located directly across from the Atrium in the Great Hall. Guests were greeted to a visually stunning sight. The tables were covered by textured blush or embroidered taupe linens, gold chargers, and centerpieces containing blush & cream roses, David Austen roses, and hydrangeas. The head table featured blush tablecloths, gold sequin runner with a real hydrangea runner that spilled onto the floor. The table was topped with centerpieces of varying heights that included hydrangeas, roses & orchids hanging down. Our wedding party and ourselves were seated in clear, ‘ghost chairs’, adorned with a gold ‘V’ on each backside. Tufted couches with blush and sequined pillows sat on the corners of our checkered dance floor. In the left corner was a photobooth station, and to the right was a Comfy Cow ice cream cart and a large chocolate fountain.

Dinner was served buffet style because I believe in sending your guests home full and happy! We also didn’t want to skimp on the options so that people had choices. For their protein guests could choose from beef tenderloin, chicken marsala, and shrimp skewers with a pesto sauce. Sides included haricot verts, mac n’ cheese, fingerling potatoes, mixed green salad and freshly baked bread. Both of our cakes were a custom blue-funfetti with buttercream frosting. Mine was light blue with the re-creation of the stars and flowers embroidered on my dress, topped off with varying flowers. Eric’s was a single layer cake that was topped with a replica of his beloved Green Mini Cooper with each of our four dogs (yes-four!) hanging out. If you weren’t full by then, you could wander over to the Comfy Cow ice cream cart - that featured flavors like Munchie Madness & Blueberry-Lemon Cheesecake – or you could dip cream puffs, fruit, and Rice Krispies at the chocolate fountain. Kenny Sauter of Masters of Music kept the dance floor packed all night long.

At the end of the night, guests were treated to two small doughnuts in the shape of our initials E & K made by our favorite (and very popular!) local doughnut shop – Hi-Five Doughnuts. We exited to a host of sparklers – that the rain was trying to put out – and off we went back to our hotel. 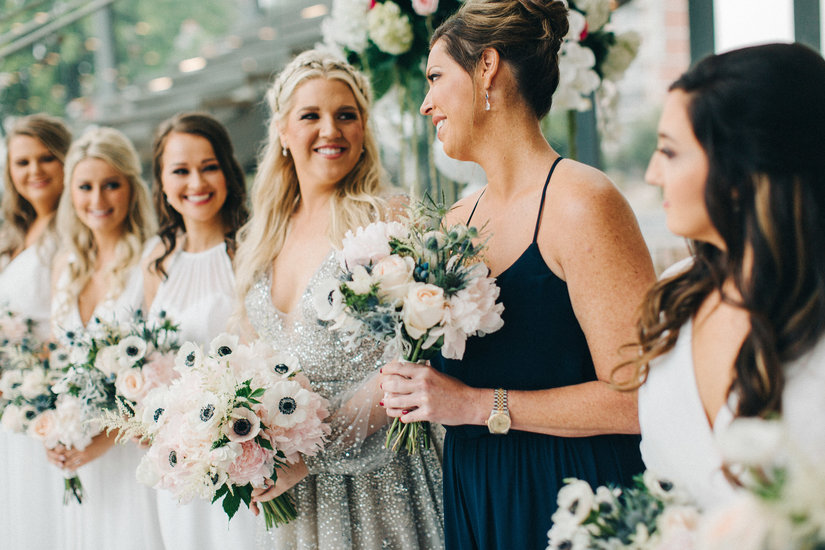 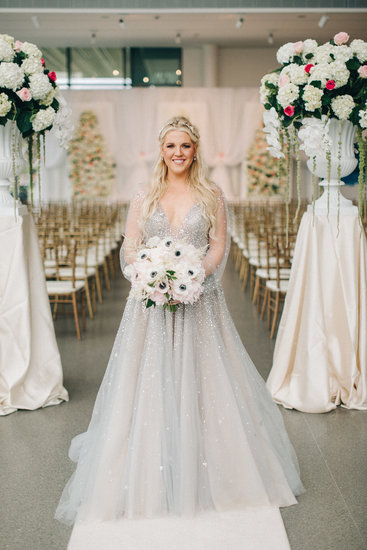 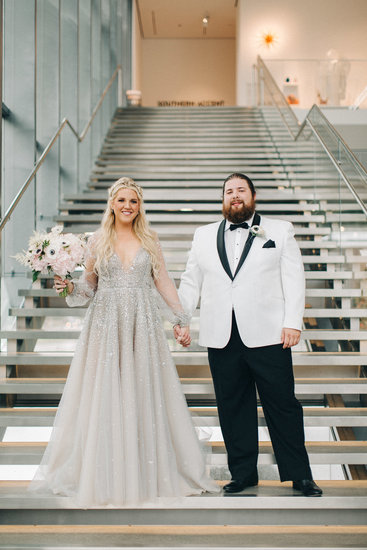 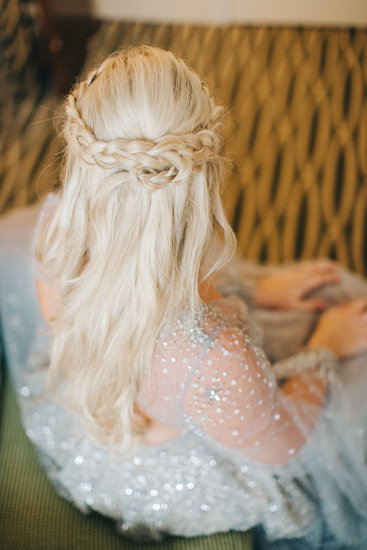 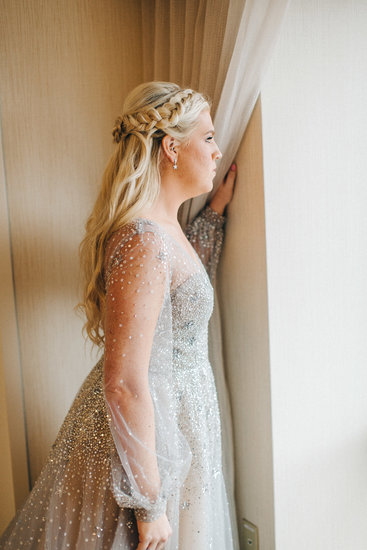 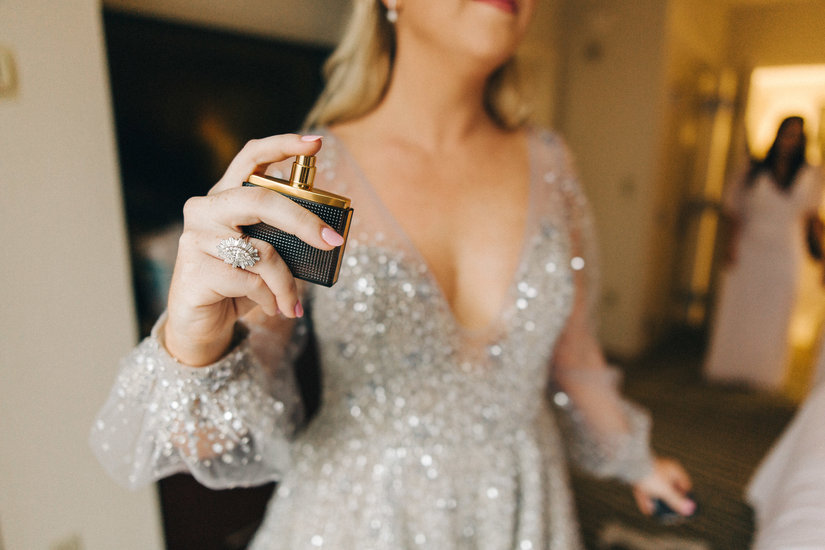 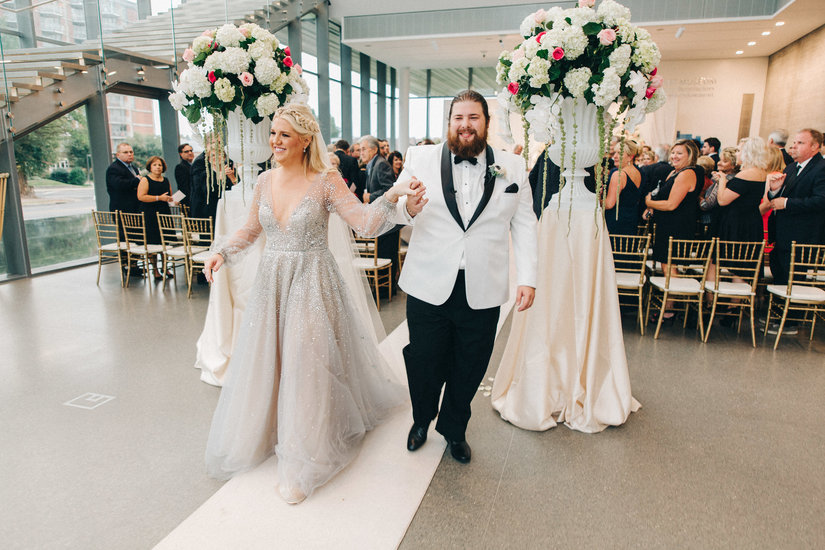 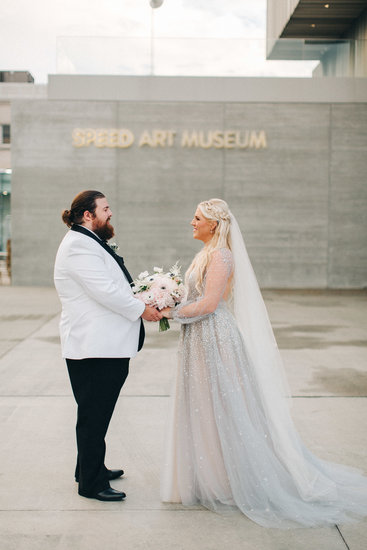 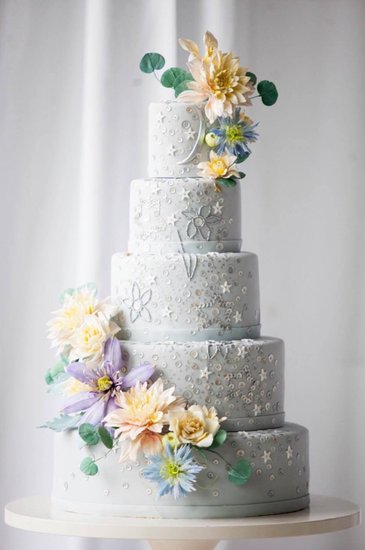 In light of the CV-19 related concerns and developments, we at JLM Couture are even more closely managing timely delivery of your orders, giving attention to wedding dates.

We are closely communicating with the stores you purchased your bridal gowns and or bridesmaids dresses through, and those stores will be in touch with any updates.

The happiness and satisfaction of our brides is always of utmost importance, especially now.